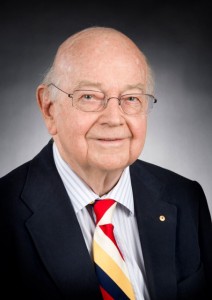 As Senior Australian of the Year for 2013, I applaud the efforts of Lismore Remembering and Healing to celebrate the International Day of Peace. I have agreed to be Patron of RaH, because I affirm your stand against all war. Attempts at military solutions to difficult situations and dangerous factions inevitably being misery and grief in their wake, and incite hatred and discrimination. Powerful countries justify a right to intervene in the problems of lesser States, but their own interests prevail.

We have a duty as global citizens to strengthen and support Australia’s contribution to the international mechanisms for peaceful and thoughtful exchange that operate through the United Nations. At the same time, as citizens of Australia, we recognise within our own country the suffering and hurt that has affected those caught up in armed conflict anywhere. We acknowledge the past brutal treatment of our Aboriginal communities, and the many persons from other places whose lives have been soured and seared by war and who are now resident here with us. 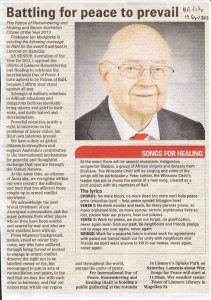 From whatever background, nation, creed or colour they come, any who have suffered through being forced or incited to engage in armed conflict deserve the right not to be labelled enemy or foe, but encouraged to join in acts of reconciliation and peace, to the end that we may live with each other in harmony, and that our nation may, within our region and throughout the world, pursue the paths of peace.